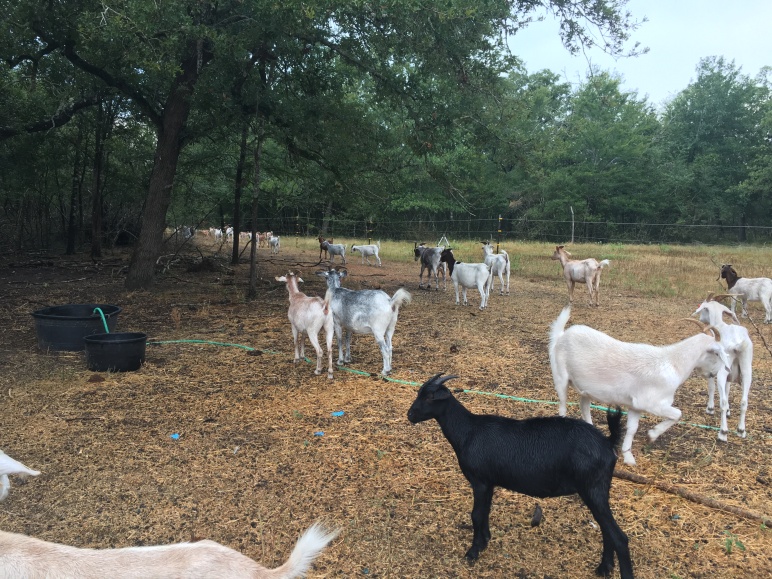 It’s August in Texas, a most hot and uncomfortable time of year. To me, it’s one of those months that speeds by when you’re looking back, but seems to take forever when you’re in it.  August is the end of summer, beginning of school, and  the height of breeding season for goats. And hot.

At the beginning of the month, I felt like I had way too many goats left for sale and was planning to take some to the October Mid-America Kiko Goat Association sale in Guthrie.  However, yesterday, I sold the last doelings, leaving eight in my keeper pen– nine if you count the purebred Nubian doeling who is NOT for sale. This is the first year I’ve been able to hold on to several doelings which means I will have yearlings to sell next year. Something customers really like!

As I’ve mentioned before, we had a big batch of kids later in the year than I like to kid, so we have ten bucklings that are most likely headed to market.  Tomorrow we will be measuring to see if one or two will be held back.  I have a really nice Kiko-Spanish commercial buckling, but seems no one is looking for one right now, but probably will be the week after they all go to the Navasota Market.

We have not had any appreciable rain in quite some time, so the pastures are brown and bare and the trees are beginning to drop their leaves.  We set up watering in the Maternity Ward, which really is under pressure right now as it’s doing extra duty as a breeding pen. Patches Ranch Cash is courting his first six does there and seems to have things figured out, even if the first fresheners haven’t. This morning, Sir Tommy got into the alleyway between pastures and he and Patches were going after it, Tommy not relishing being left in the buck pasture, he figured he’d fight the young buck.  Both did a lot of head banging, but we got everyone back where they belonged. Sir Tommy will get his turn at the end of August, when Ozy parts ways with his girls.

In no time, it will be kidding season. We will be having Boer babies at Thanksgiving, followed by Kiko kids at Christmas.